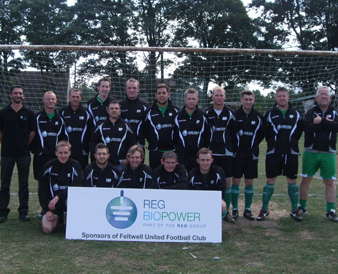 Living Fuels, in partnership with parent company, REG Bio-Power, are proud to announce their sponsorship of the Feltwell United Football Club.

The team practice near the birthplace of Living Fuels, and therefore were a natural choice for sponsorship.

Ian Collins, REG Bio-Power’s Managing Director commented: “We were pleased to be asked to sponsor Feltwell United and have been impressed by their progress through the leagues. We admire the ambition of the club and look forward to following them to Europe in the coming years. REG Bio-Power is already in training for our five-a-side match.”

After winning Division Two and then continuing their success by storming through Division One of the Central & South Norfolk League, Feltwell United applied for the Anglian Combination League and were accepted for the 2012/2013 season, starting in Division Six. The team have since been promoted to Division 5 for the 2013/14 season and are currently sitting at the top of the division, after winning their first four games. A reserve team was recently formed and has been promoted to Division Three of the Central & South Norfolk league for this season.

Recently, the club was also awarded the FA Adult Chartered Standard Club status and have revamped their premises for this season including the construction of brand new changing rooms.

The club’s target is to continue improving both on and off the pitch each season and to progress to the top of the league pyramid.

Neil Edwards from Feltwell United, said of the sponsorship; “All the players, coaches and committee members of Feltwell United F.C wish to thank REG Bio-Power and Living Fuels for the very generous sponsorship of the first team’s tracksuit tops for the 2013/14 season. The tops have helped to improve our image off the field and provide the team with a sense of unity. We hope to develop a strong relationship with REG Bio-Power and Living Fuels over the coming seasons.”